Bacteria form multicellular communities known as biofilms that cause two thirds of all infections and demonstrate a 10 to 1000 fold increase in adaptive resistance to conventional antibiotics. Currently, there are no approved drugs that specifically target bacterial biofilms. Here we identified a potent anti-biofilm peptide 1018 that worked by blocking (p)ppGpp, an important signal in biofilm development. At concentrations that did not affect planktonic growth, peptide treatment completely prevented biofilm formation and led to the eradication of mature biofilms in representative strains of both Gram-negative and Gram-positive bacterial pathogens including Pseudomonas aeruginosa, Escherichia coli, Acinetobacter baumannii, Klebsiella pneumoniae, methicillin resistant Staphylococcus aureus, Salmonella Typhimurium and Burkholderia cenocepacia. Low levels of thepeptide led to biofilm dispersal, while higher doses triggered biofilm cell death. We hypothesized that the peptide acted to inhibit a common stressresponse in target species, and that the stringent response, mediating (p)ppGpp synthesis through the enzymes RelA and SpoT, was targeted. Consistent with this, increasing (p)ppGpp synthesis by addition of serine hydroxamate or over-expression of relA led to reduced susceptibility to thepeptide. Furthermore, relA and spoT mutations blocking production of (p)ppGpp replicated the effects of the peptide, leading to a reduction of biofilm formation in the four tested target species. Also, eliminating (p)ppGpp expression after two days of biofilm growth by removal of arabinose from a strain expressing relA behind an arabinose-inducible promoter, reciprocated the effect of peptide added at the same time, leading to loss of biofilm. NMR and chromatography studies showed that the peptide acted on cells to cause degradation of (p)ppGpp within 30 minutes, and in vitro directly interacted with ppGpp. We thus propose that 1018 targets (p)ppGpp and marks it for degradation in cells. Targeting (p)ppGpp represents a new approach against biofilm-related drug resistance. 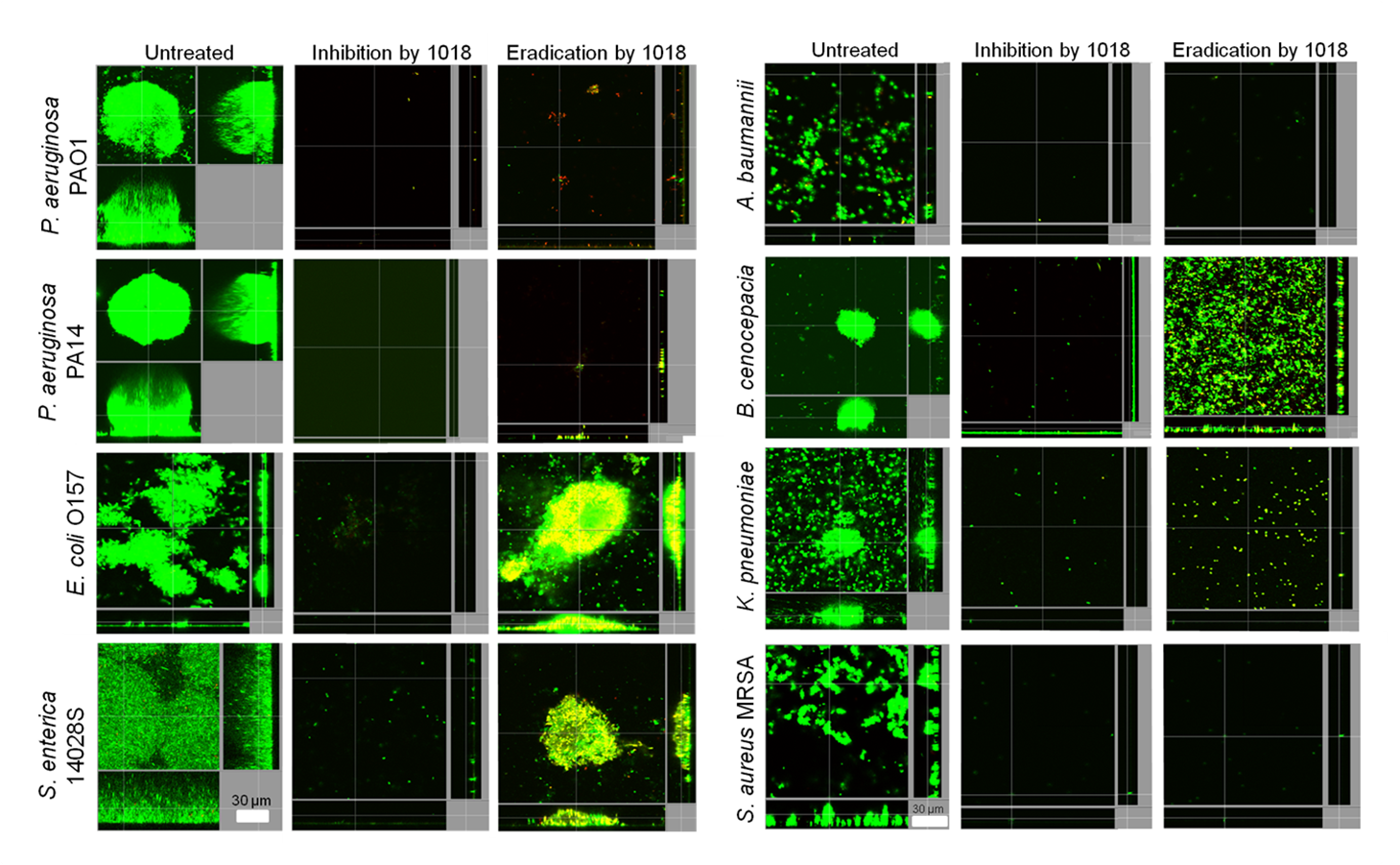