We are very pleased to announce that one of our M&I undergraduate majors, Gunjan Mhapankar, is one of only 2 students from Canada to be chosen as 2016 "The Queen's Young Leaders award".

The Queen’s Young Leader Award recognises and celebrates exceptional people aged 18-29 from across the Commonwealth, who are taking the lead in their communities and using their skills to transform lives. Winners of this prestigious Award will receive a unique package of training, mentoring and networking, including a one-week residential programme in the UK during which they will collect their Award from Her Majesty The Queen. 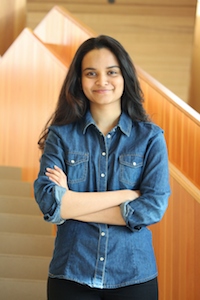 Gunjan has worked with over 20 different community-based organisations and non-profits across the cities of Vancouver, Burnaby, Surrey and Richmond that address needs of at-risk communities. As winner of the Chapman and Innovation Award, she co-founded The Digital Storytelling Project which uses video and filmed interviews to increase public awareness about local community services. Her project has featured non-profits such as QMUNITY, Positive Living BC, and Big Sisters of BC Lower Mainland and highlighted important social issues of LGBTQ rights, mental health, violence against immigrant and minority women, youth unemployment, and individuals living with HIV-AIDS in BC.

Through her work she hopes to strengthen local communities by connecting people with the help they need and break down the barriers of fear and stigma involved in accessing essential services.

She is currently working in collaboration with the Frames Film Project which is an East-Vancouver-based film production and life skills program for multi-barrier youth to learn the basics of filmmaking in a supportive, safe and fun environment.

Gunjan is an outstanding student leader who believes in fostering change at the level of the community and her goal is to one day create a social enterprise that combines her interest in filmmaking with positive social change.

This video highlights the work of Positive Living BC which empowers people living with HIV/AIDS through peer support, outreach and research-driven programming:

This video highlights the work of Big Sisters of BC Lower Mainland whose work inspires and empowers girls to reach their potential, both as individuals and citizens: