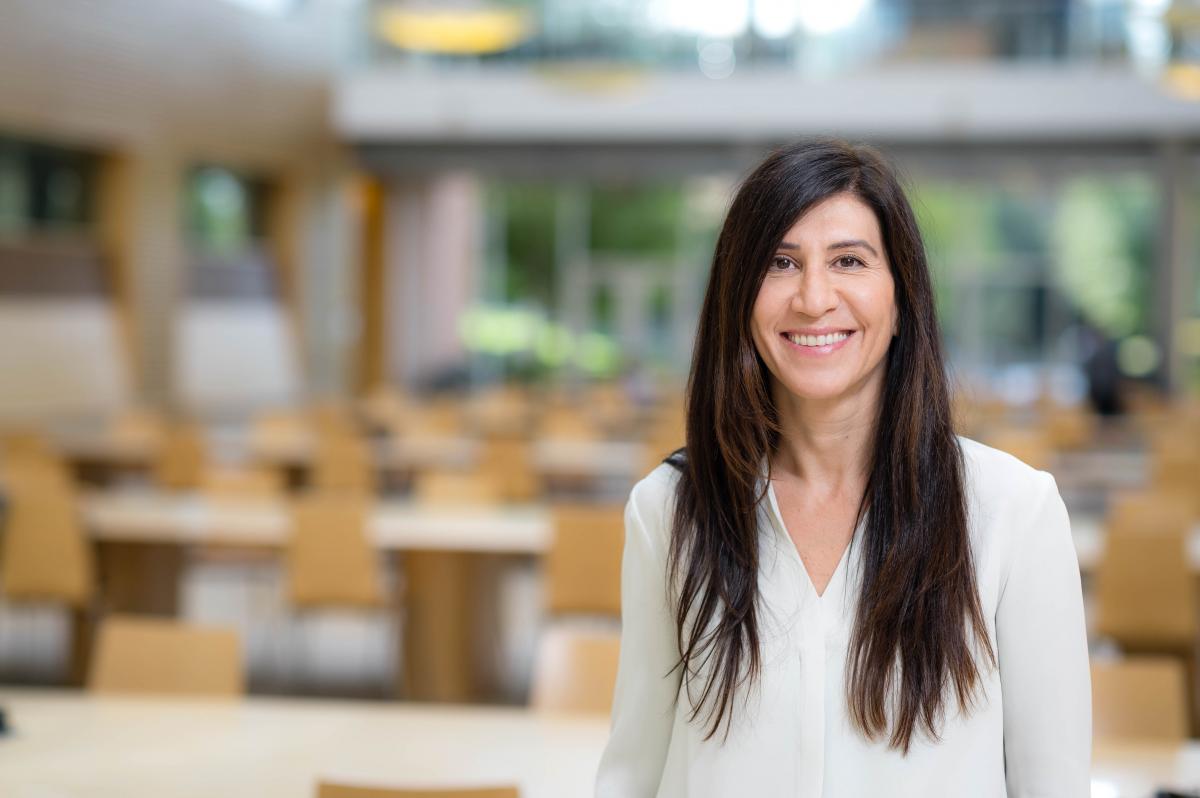 There are some things in life that often seem impossible while in the midst of doing it all: teaching a complicated subject, finding the right career that supports your research goals, and balancing your life, career and family.

But Elitza Tocheva shares that no matter where you end up in your career, you never stop learning. That as a scientist, there’s always places to go and change throughout your career. And for every journey to get somewhere, there are many more destinations to choose from.

For right now, Tocheva feels fortunate to be a member of the Department of Microbiology and Immunology where she was recruited as an Assistant Professor in January 2019.

The department is very excited to have her on our team, where she is running the Tocheva Lab and teaching a Bacterial Pathogenesis class to fourth year students with Charles Thompson. The class, which emphasizes the role of bacteria in everyday life, teaches the many ways bacteria infect and cause disease in a host – which reflects her own research on bacterial cell envelopes and secretion systems.

Through these research subjects, Tocheva is studying 1) the composition of bacteria and how second membranes may have evolved, as the cell envelope in bacteria provides the first line of defense from the hostile environment and antibiotics and 2) how bacteria causes disease and affect human cells, including Mycobacteria that cause tuberculosis.

The long-term goal of this research is to help in our fight against bacterial infections – which will have practical health benefits for Canadians and a major impact on several key industries, such as biotechnology, food and agriculture, and thus the economy.

Navigating research with the highest resolution of cells

Before she was recruited to UBC, Tocheva was an Assistant Professor at the Université de Montréal and an Associate Director of The Facility for Electron Microscopy Research at McGill University. She is also the recipient of a Canada Research Chair Tier 2 in Microbial Ultrastructure.

For her research, Tocheva uses advanced structural biology techniques such as cryo-electron tomography (cryo-ET) and correlative light and electron microscopy (CLEM). Such approaches produce three-dimensional images of intact cells and help identify proteins within the crowded environment of the cell.

Cryo-ET allows scientists to investigate subcellular ultrastructures in the living organism at a macromolecular resolution while minimizing changes to the sample between imaging. Through this, researchers can see what’s inside of a cell – including membranes, proteins, and peptidoglycan (PG) layers – making it one of the only approaches we have currently available to look at cells in vivo (Figure 1).

Figure 1. A slice through a cryotomogram of a diderm bacterium revealing main cellular features (adapted from etdb.caltech.edu).

In fact, this new research method was so revolutionary that the developers of cryo-EM won The Nobel Prize in Chemistry in 2017.

“It seemed as if overnight cryo-EM became relevant and exciting,” says Tocheva of the Nobel Prize win.

Now, the world is paying more attention not just to the process of electron microscopy but what we can learn from it and what it can achieve – like allowing researchers to study the structure of a variety of biological molecules at an atomic level and in multiple conformations – from proteins involved in circadian rhythm to the Zika virus.

Finding balance and success in the changing world of science

Tocheva’s training at Caltech with Grant Jensen and experiences at the Université de Montréal and McGill University gave her an opportunity to become an expert in this exciting area of research. Now in the Department of Microbiology and Immunology, she can collaborate with other microbiologists in a constantly changing research environment that’s both challenging and fun.

At UBC, Elitza Tocheva has found a place where each day she can both apply what she already knows and be inspired by learning something new. But she wants people to know that there’s more than one ending when it comes to a career in science – and there’s never really an endpoint at all.

“Science is a great educator. And there’s numerous ways to contribute to science,” she says.

“When you’re in academia, you’re surrounded by scientists that chose academia as a career path, but there’s so much more out there. Other fulfilling careers include biotech, teaching, scientific writing, policy making and all sorts of other professions, which students should consider.”

As she described her scientific track – a BSc and PhD in Microbiology and Immunology, the second-year lab that gave her hands-on experience to the world of microbiology, the TA position that allowed her to explore her love for structure-driven research, her Postdoc discovery of sporulating bacteria with two membranes that inspired future research subjects (Figure 2), and now an Assistant Professor at UBC – she realized that this career “track” is more of a tree, with many branches that stem from it in all sorts of directions and will continue to grow and change throughout her career.

If you’d like to explore more of Elitza Tocheva’s work in detail, you can find a full list of her published works HERE!