Chosterol catabolism by M. tuberculosis and its role in pathogenesis

Mtb is responsible for ~1.5 million deaths per year, making it the leading cause of mortality from bacterial infections. Mtb infects one third of all people, 90% of whom exhibit symptomless latent infections that represent a subclinical pool of pathogenic bacteria and complicate tuberculosis (TB) control strategies. The prevalence of TB is due in part to this ability to establish chronic infection, along with the inadequacy of current therapies. The WHO has declared TB a global health emergency. In Canada, TB is of particular concern in the First Nations. Co-infection of Mtb with the human immunodeficiency virus and the emergence of multidrug-resistant (MDR-) and extensively drug-resistant (XDR-) strains augment the risk posed by TB. Alarmingly, a study published this year in The Lancet concluded that drug-resistant strains are up to 10-times more prevalent than had been thought. The treatment of even drug-sensitive TB is arduous, with patients taking a cocktail of toxic chemotherapeutics for six months. Failure to complete this regime has fueled the rise in drug-resistance, necessitating longer, much costlier treatments. Novel therapeutics are urgently needed to decrease the length, and improve the efficacy, of treatment.

Mtb’s extraordinary success as a pathogen depends upon its ability to survive in its human host. Upon infection, Mtb bacilli are phagocytosed by alveolar macrophages (MΦs), cells that usually kill bacteria, transferring them to lysosomes. However, Mtb-containing phagosomes fail to fuse with lysosomes and the bacilli persist. Infected MΦs can become the focal point for granuloma formation. The cholesterol-rich granuloma is a hallmark of TB and can persist for decades in latent infections. The physiological state of the bacteria within the granuloma is largely unknown. Indeed, the mechanisms used by Mtb to manipulate host defenses and establish chronic infection are not well understood despite several studies.

In 2007, we discovered a cluster of ~80 genes encoding a pathway that enables Mtb to use cholesterol as a growth substrate. Cholesterol is a steroid, a class of lipids possessing four fused rings (A to D). Indeed, it is the most abundant steroid in mammals, constituting up to 45 mol% of cell membranes and serving as a precursor of many hormones. Cholesterol was recognized to be critical to Mtb 12 years ago when its presence in the host membrane was shown to be vital in phagocytosis. Our discovery of the cholesterol catabolic pathway opened up a new field of study that has established a more profound role for this steroid in mycobacterial pathogenesis. The implications extend to other cholesterol-degrading pathogenic actinobacteria, such as Rhodococcus equi, which causes a fatal disease in foals and immunocompromised humans. 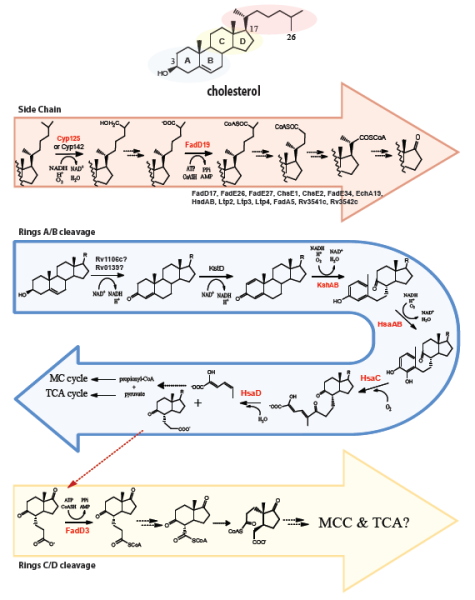 The cholesterol catabolic pathway of Mycobacterium tuberculosis. The pathway is organized according to the structure of steroid molecule: side chain (light red), rings A/B (light blue) and rings C/D (yellow). The first two processes are encoded by the genes of the KstR regulon and appear to occur concurrently to some extent, as reflected in the “R” at C-17 of the rings A/B-degrading intermediates. Rings C/D degradation appears to be largely encoded by the KstR2 regulon. Red font identifies enzymes whose reactions have been validated by the Eltis group.

The cholesterol catabolic pathway is an emerging therapeutic target in Mtb. Transcriptomics and mutagenesis have identified many of the pathway genes as critical for pathogenesis. Moreover, deletion of specific genes attenuates pathogenicity. Some gene deletion mutants are more strongly attenuated than others. Although this variation is obfuscated by differences in infection models and Mtb strains, some metabolites are bacterio-toxic and others may affect the host. Two of the strongest reported phenotypes have been for mutants in kshAB and ipdAB, respectively: the former are completely avirulent while the latter have been patented as live vaccines based on studies in R. equi. The kshAB genes encode ketosteroid 9a-hydroxylase, a Rieske-type monooxygenase involved in degrading rings A/B. The avirulence of kshAB mutants has been attributed to the accumulation of androstene steroids. However, these compounds are likely not the physiological substrate of KshAB. IpdAB is a predicted CoA transferase involved in rings C/D degradation. Although the IpdAB reaction is unknown, the strong phenotype may be due to the accumulation of CoA thioesters. We recently showed that these thioesters are initially produced by FadD enzymes. In some bacteria, FadD homologues are reversibly acetylated to regulate carbon metabolism. Such regulation is unexplored in Mtb although the bacterium harbours a reversible acetylation system. Properly understanding cholesterol catabolism and its regulation is essential to understanding its role in pathogenesis.

The cholesterol catabolic enzymes include excellent targets for novel antimycobacterials. KshAB, HsaC, and IpdAB are particularly attractive since their inhibition cause bacterio-toxicity. Rieske-type oxygenases such as KshAB are susceptible to uncoupled reactions in the presence of substrate analogs. Such uncoupling results in the production of reactive oxygen species (ROS) as well as the futile consumption of intracellular NADH. This leads to redox imbalance and multi-target oxidative stress analogous to that caused by the drug isoniazid. Mtb is likely susceptible to such uncoupling inhibitors since the pathogen protects itself primarily against extracellular ROS released into the phagosome. Using a high throughput screen, we have identified several compounds that strongly inhibit HsaC, the ring-degrading extradiol dioxygenase. KshAB, HsaC and IpdAB have no close human homologues and are not targets of current therapies, further increasing their value as therapeutic targets since host toxicity and bacterial cross-resistance are less likely. 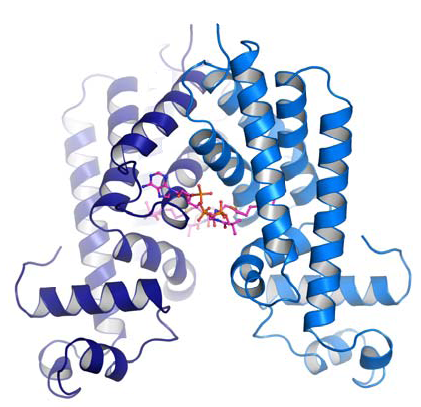 Significance: The proposed research should provide major new insights into bacterial steroid metabolism, acetylation networks in prokaryotes, the role of cholesterol catabolism in Mtb pathogenesis, and the catalytic mechanisms of important families of enzymes. It may also help establish a new method for evaluating the mechanisms underlying host-pathogen interactions. Finally, the research may facilitate the development of novel therapeutic strategies to combat TB inducing.

Our research team at FINDER: a state-of-the-art BSL-3 laboratory at LSI, UBC 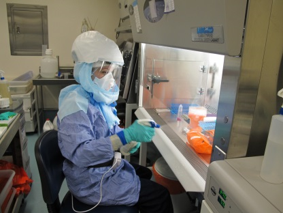 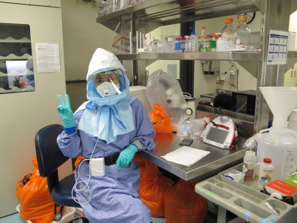 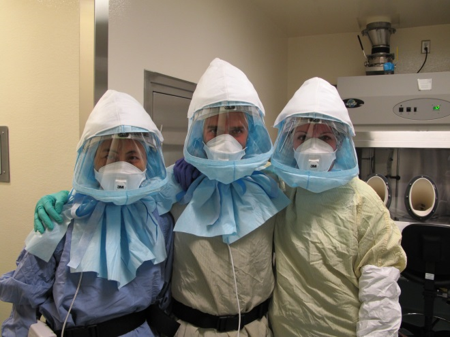 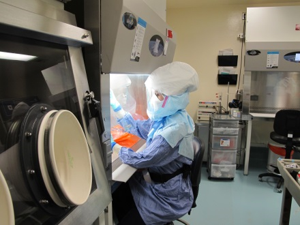 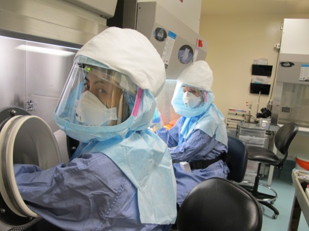